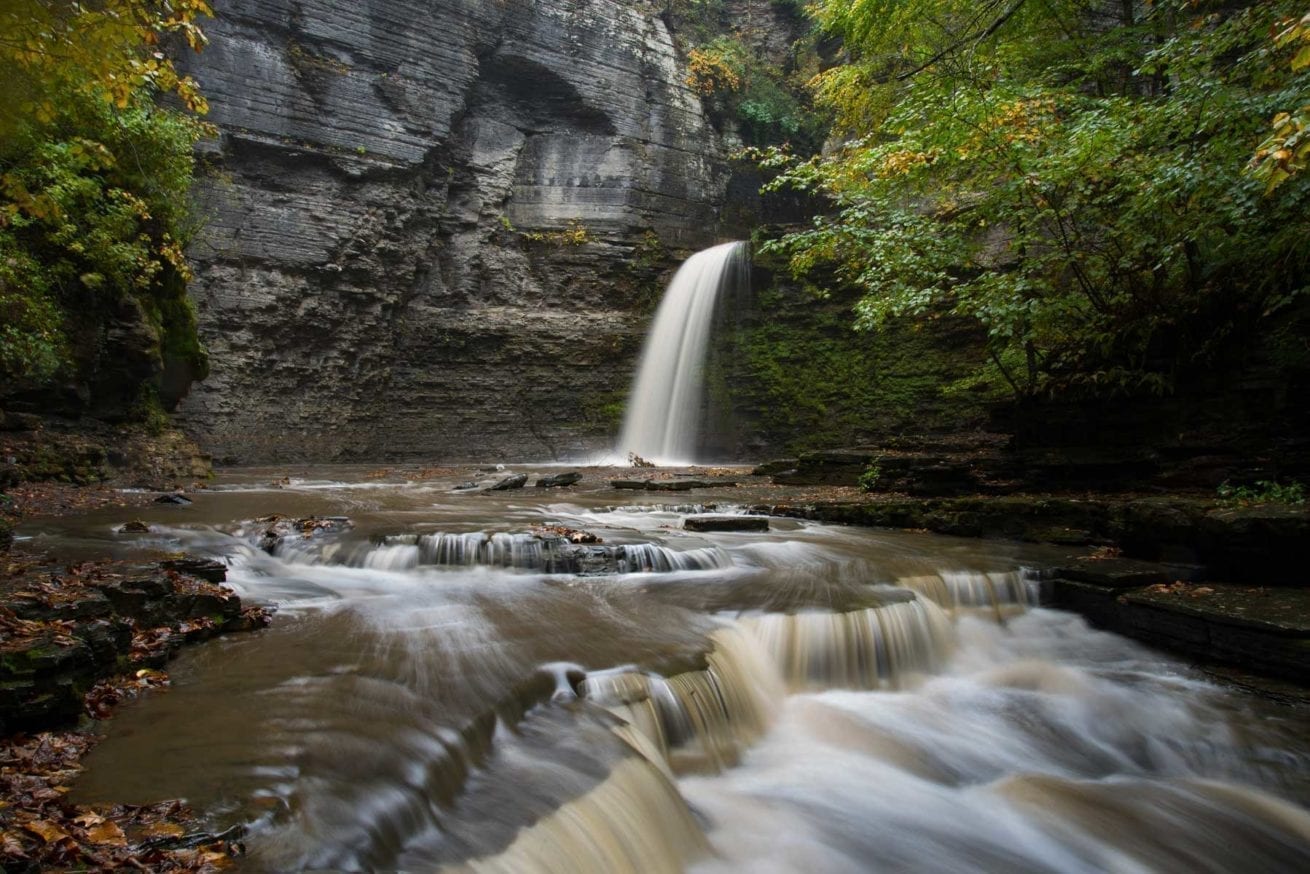 The Finger Lakes Region is known for many things: Wine, agriculture, history, and of course, waterfalls! And with such an abundance of waterfalls in the region, it’s easy for anyone to find their favorite Finger Lakes waterfalls!

Geology and erosion have presented the region with a number of spectacular waterfalls that draw visitors from all around. The phrase “Ithaca is Gorges” speaks to the many gorges that can be found in just Ithaca alone. These gorges that run throughout the landscape, not just in Ithaca, but the region as a whole, are home to myriad cascades!

State parks such as Robert H. Treman, Buttermilk Falls, Fillmore Glen, Watkins Glen, and of course Letchworth, are just a handful of the places that are well-known for their massive gorges and spectacular waterfalls! Even the smaller glens that form off to the sides of the lakes contain hidden gems.

Come along as we explore some of the best waterfalls in the Finger Lakes Region!

Outdoor recreational activities are, by their very nature, potentially hazardous and contain risk. Locations, trails, and waterfalls listed on this site, and conditions, accuracy, and safety, cannot be guaranteed. You are hiking and visiting these locations at your own risk and at your own will.

Click each name to be taken to its corresponding page.

Bucktail Falls – This 35-foot cascade found along Otisco Lake has become a favorite of waterfallers in New York. 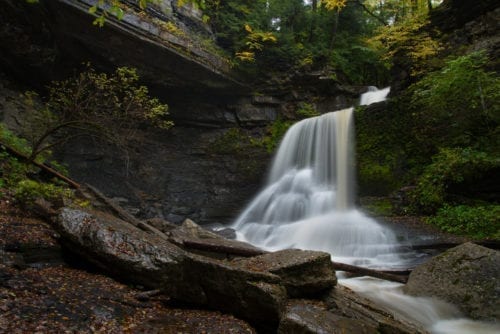 Carpenter Falls – One of the falls found on the Bahar Preserve in Manlius, this 75-foot plunge waterfall.

Cascadilla Gorge – A number of nice waterfalls form throughout this gorge through which Cascadilla Creek flows. This beautiful area is maintained by the Cornell Botanical Gardens.

Buttermilk Falls State Park – This state park is home to a number of waterfalls along its namesake Buttermilk Creek. The 90-foot Buttermilk Falls is the main attraction here, but don’t miss all the other nice falls above. 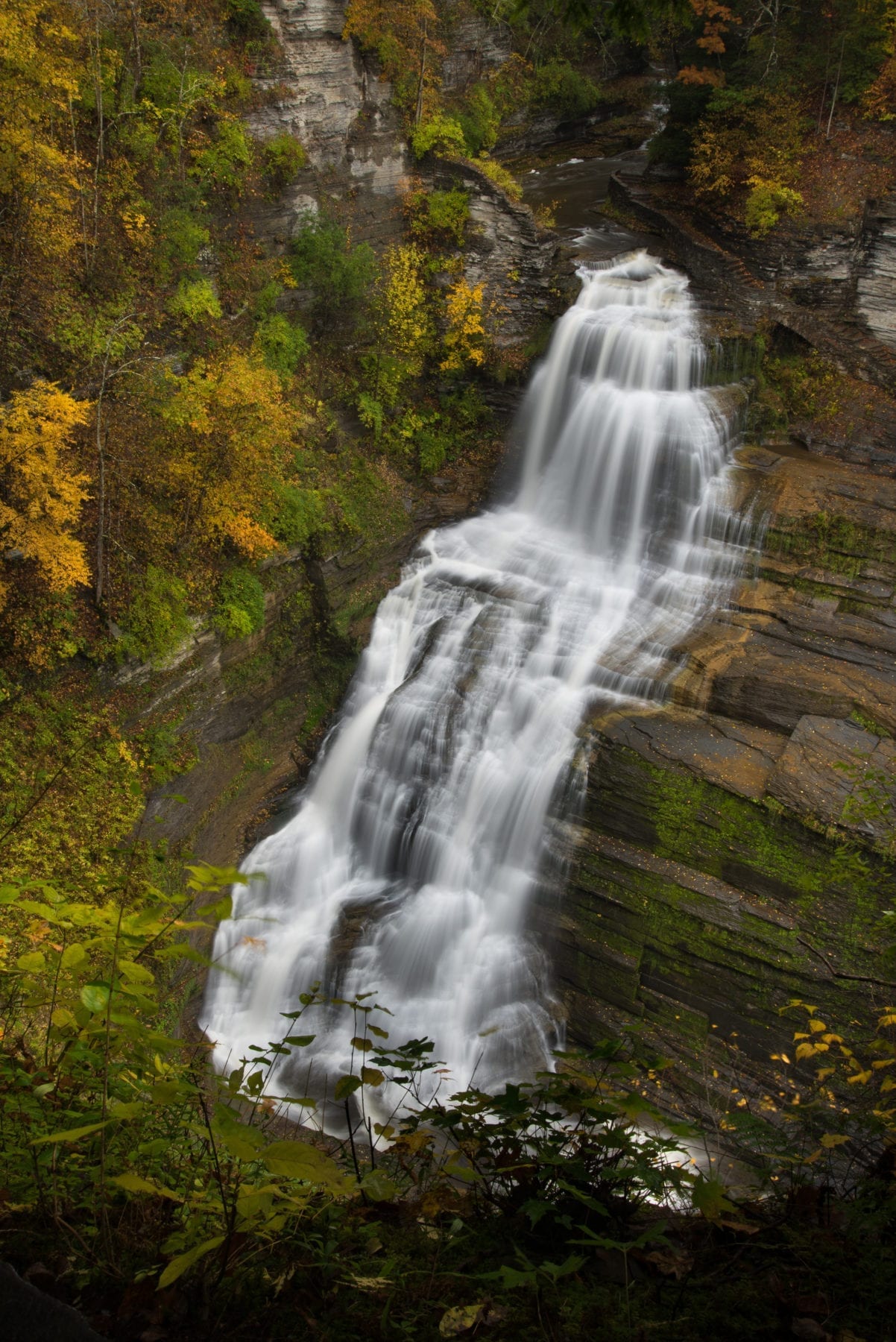 Robert H. Treman State Park – Another of the state parks that is home to a large number of waterfalls, Lucifer Falls, which ranks as one of the more popular Finger Lakes waterfalls, being the largest.

Sweedler and Thayer Preserves – A handful of nice waterfalls form on Lick Brook as it flows through these two preserves. Lick Brook Falls stands at a little over 100 feet.

Watkins Glen State Park – 19 named waterfalls are found here. Among them are Rainbow Falls and Triple Cascade which are often observed in photographs of the iconic scene containing the stone bridge.

Shequaga Falls – A large waterfall that can be seen from roadside in the heart of Montour Falls.

Havana Glen – Eagle Cliff Falls get its name from the image of an eagle that has formed in the rock next to the falls. 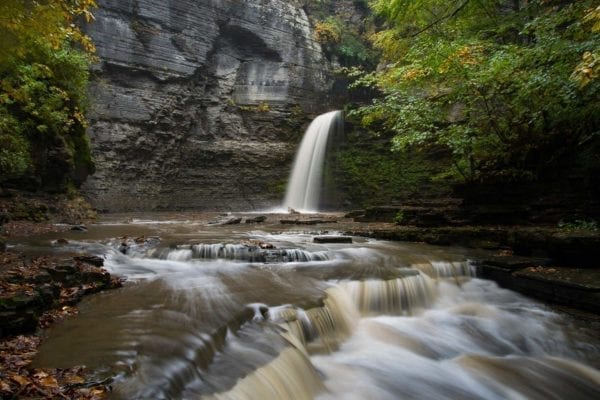 Seneca Mills Falls – This 45-foot cascade forms on the outlet from Keuka Lake, along the Keuka Lake Outlet Trail.

Letchworth State Park – “The Grand Canyon of the East” is a stunning place to visit. Tremendous cliff walls that flank the Genesee River, and a treasure trove of waterfalls, make this a bucket list destination on many lists!

High Falls in Rochester – The Genesee River flows through the heart of Rochester and forms a handful of large waterfalls. the most photographed of the lot is High Falls.

PLEASE NOTE: All properties should be considered posted and/or private property unless you have specific knowledge otherwise. Access to any waterfall or natural area of any category is a privilege and can be revoked at any time for any reason. Respect landowner rights, speak out should you witness anyone doing otherwise and educate everyone willing to listen about good environmental stewardship and the Leave No Trace (LNT) ideology. Please use our New York State Waterfall Map responsibly.

Dig The Falls would like all site visitors to take the greatest precautions when visiting any location listed herein. Although there are some locations that fall within park systems, there are many more that do not and are considered very dangerous to visit. ALL outdoor locations can be considered dangerous. In visiting this website you are agreeing to release Dig The Falls of any liability from any visitations to any of the locations listed on the website as a whole.

Some waterfalls have a reputation for being dangerous. While terrain and trail conditions can make any waterfall hazardous, ALMOST every accident at waterfalls can be avoided.

By following a few pointers and exercising diligence and common sense, a trip to a waterfall can be a lasting memory rather than a tragedy.

Increased water circulation and the force of the onrushing current can also push swimmers into or under underwater ledges, giving no chance for escape. Many swimmers have perished because they underestimated the power of moving water. Do not swim when conditions even look dangerous. Chances are, they are.

If signs are posted, pay close attention and do not go where they tell you not to. They are there for a reason. Just because you may see others doing things that they shouldn’t be doing doesn’t mean it’s allowed. Instagram stardom doesn’t count if you’re dead.

Did we miss something?
Collaboration Opportunities!
Local Historians Needed!