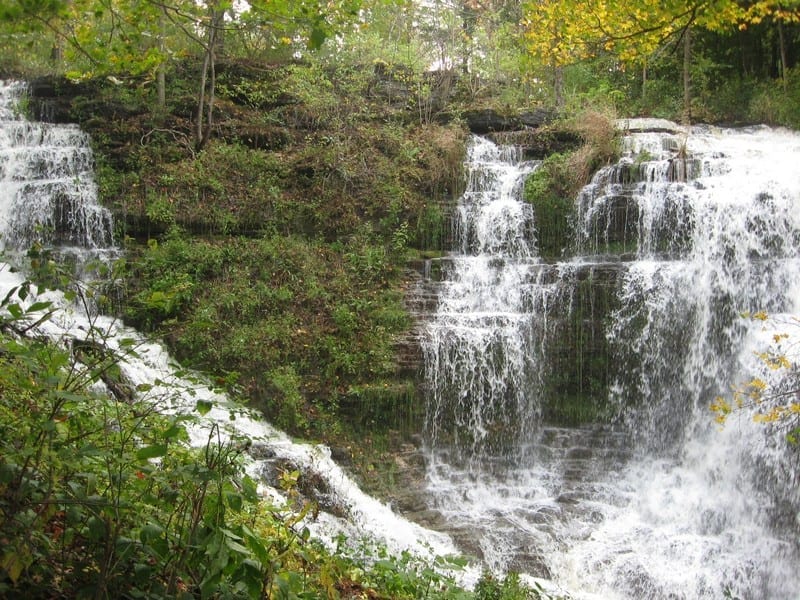 Towns that are within the Tug Hill Region
Adams, Champion, Lorraine, Rodman, Rutland, Watertown, Worth

Adams is a town in Jefferson County, and named after President John Adams. The town contains a village also named Adams. The village and town are south of Watertown. The town is to the west of the Tug Hill Plateau. Sandy Creek flows westward through the southern part of the town, and Stony Creek flows through the northern part. Both creeks are direct tributaries of Lake Ontario.
History of Adams
Settlement began around 1800 at Adams village. David Smith built a sawmill at the present site of Adams in 1801. Renamed for John Adams in 1802 (the year after his presidency ended), the town of Adams was created from the survey townships of Aleppo and Orpheus. The eastern part of Adams was taken in 1804 to form the town of Rodman. During the War of 1812, the town of Adams formed a local militia for home defense.

The Talcott Falls Site was listed on the National Register of Historic Places in 1974.

Communities and locations in Adams
Adams – The village of Adams is near the south town line on US-11 at NY-178.

Adams Center – A hamlet and census-designated place north of Adams village on U.S. Route 11 at NY-177.

Champion is a town in Jefferson County. The town is named after General Henry Champion, early owner. The town is on the eastern edge of the county and is east of Watertown. The Black River flows along the town’s northern boundary. The southeast town line is the border of Lewis County.
History of Champion
The town was the birthplace of George E. Spencer (1836-1893), a Union general in the Civil War who later served two terms as a U.S. senator from Alabama. Champion was established in 1800 from part of the town of Mexico (now in Oswego County) before the county was created. In 1803, part of the town was used to establish part of the town of Harrisburg (now in Lewis County). The community of West Carthage incorporated as a village in 1889.
Communities and locations in Champion
Champion – A hamlet west of West Carthage village, located on NY-126.
Great Bend – A hamlet and census-designated place on the Black River in the northern part of the town on NY-3 and NY-26.

West Carthage – A village on the east border of the town by the Black River and NY-26.

Lorraine is a town in Jefferson County. The town is named after Lorraine, a region in France. Other Names: Lorraine Huddle, The Huddle
History
Settlement began around 1802 and called “Lorraine Huddle”. The original designation for this area was “Atticus”. The town was formed in 1804 from part of the town of Mexico in Oswego County. At that time the new town was called “Malta”, but the name was changed to “Lorraine” in 1808 in order to avoid confusion with the town of Malta in Saratoga County.

Rodman is a town in Jefferson County. The name is derived from a public official, Daniel Rodman. The town is in the southeastern part of the county and is south of Watertown. The town was originally called “Harrison”.
History
The region was part of Macomb’s Purchase. The town was first settled around 1801. Rodman was organized as a town in 1804 from part of the town of Adams. Part of Rodman was used in 1808 to form the Town of Pinckney (Now part of Lewis County). The town is north of Syracuse and south of Watertown, on the western slopes of the Tug Hill Plateau. The eastern town line is the border of Lewis County. The North and South Branches of Sandy Creek run through Rodman and eventually join near Litt’s Bridge at the western border of the town.
Communities and locations in Rodman
Babbits Corners – A location in the southeast part of the town at the junction of NY-177 and County Road 189. Murray Nature Trail
East Rodman – A hamlet near the eastern town line on County Roads 69 and 156. It was also called “Whitesville”. East Rodman Falls aka Sandy Creek Falls (Private Location)
Ross Corners – A location in the southwest part of the town on County Road 97.
Tremaines Corners – A hamlet southeast of the center of the town on County Roads 95 and 177.
Whitford Corners – A location in the northwest part of the town on NY-177. The location was also called “West Rodman” and “Toad Hollow”.
Zoar – A hamlet northeast of Rodman village, formerly known as “Unionville”.

Shingle Gulf – A canyon in the northeast part of Rodman.

Rutland is a town in Jefferson County. Rutland is in the eastern part of the county, east of Watertown and southwest of Fort Drum. The Black River defines the north town line, and most of the south town line is the county line of Lewis County.
History
The community of Black River set itself apart from Rutland and the town of Le Ray by incorporating as a village in 1891. The town was formed from part of the town of Watertown in 1802 before the establishment of Jefferson County. In 1844, an island in the Black River at Felts Mills was annexed from the town of Le Ray.
Communities and locations in Rutland
Black River – A village along the north town line and the Black River, half in Rutland and half in Le Ray. It was once called “Lockport”.

Felts Mills – A hamlet (and census-designated place) by the north town line and the Black River. A mill was built in 1800, establishing the community. Black River, Falls on, Felt Mills
Harpers Ferry – A hamlet on NY-126 at County Road 163, east of Rutland Center.
Rutland Center – A hamlet on NY-126.
Tylerville – A hamlet in the south part of town at the junction of County Roads 69 and 161. The community dates from about 1805 and was originally called “South Rutland”.
Underwood Hill – An elevation in the southwest part of Rutland.
Rutland Hollow – A shallow valley in the northwest part of the town. Rutland Hollow Falls aka Butternut Falls
Rutland Lake – A small lake near Rutland Center.
Sandy Creek – A stream flowing through the south part of Rutland. Helsinki Falls

Watertown is a town in Jefferson County. The town is located in the central part of the county and borders the city of Watertown to the south, east, and west. The town of Watertown is in central Jefferson County, and is bordered to the north by the city of Watertown and the towns of Brownville, Pamelia and Le Ray, to the east by the town of Rutland, to the south by the towns of Adams and Rodman, and to the west by the town of Hounsfield.
History
Watertown was established as a town in 1800 before the formation of Jefferson County, while still in Oneida County. The towns of Rutland (1802) and Hounsfield (1806) were soon formed from parts of Watertown.
The town was first settled in 1800 around the time of the first permanent US military presence in the region, which was established at nearby Sackets Harbor to guard the international border and to fight smuggling in the St. Lawrence region.
In 1816, the community of Watertown set itself off from the town by incorporating as a village. It became a city in 1869.

Communities and locations in the town
Burrville (formerly “Burrs Mills”) – A hamlet near the east town line on NY-12. The name is from Captain John Burr and his family, early settlers. The community was an early rival for another community which became the City of Watertown.

Dry Hill – High ground in the southern part of the town and the location of a skiing area. The name is based on the relatively low level of the water table in the area (making it very difficult to draw a successful water well in the area). Dry Hill Falls
East Watertown – A hamlet near the east town line on NY-126.
Fields Settlement – A location at the west town line on County Road 63.
Huntingtonville – A hamlet in the northeast corner of the town by the Black River. It is now a suburb of the city.

Additional Waterfalls on Sandy Creek and not included in write up:
Sandy Creek Falls (Adams) Mcds

Did we miss something?
Collaboration Opportunities!
Local Historians Needed!